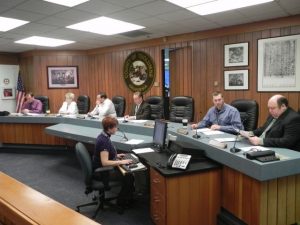 The multi-county joint powers authority primarily oversees federal subsidized low income housing. It also deals with allocating funds from things such as Community Development Block grants. It is made up of elected officials and citizens from Tuolumne County, Calaveras County, Angels Camp, Sonora, Amador County and Alpine County. Hanvelt is the representative from the Tuolumne County Board of Supervisors.

Hanvelt indicated at today’s Supervisors meeting that the agency has mismanaged its finances over the course of recent years. He sought additional information last February after a budget proposal was brought forth to the Board of Directors. With assistance from Tuolumne County Clerk and Auditor Debi Russell, he learned that the agency has been spending $33,000 per month and taking in only $19,000. He added that 80 percent of the agencies surplus funds were used up over the course of a year. Hanvelt is concerned that the agency could eventually be forced to come to the participating cities and counties and ask for a loan.

The agencies Executive Director, Larry Busby, put forward a new plan for operation through the remaining calendar year at a meeting last Wednesday. Hanvelt wrote in a memo to the Supervisors that, “Some of the data was inaccurate and the margins for error are slim. There has been an influx of cash at the federal level and some small grant funds but these do not carry long term salvation.”

The agency will hold its next meeting on June 15th. Hanvelt told the Supervisors that unless the agency deals with the spending issues effectively, he will recommend that the county end its affiliation. At that time an alternative would be suggested so that the county can still deliver the services currently provided by the agency. It would have to be approved by a vote of the Supervisors. Hanvelt has been working with the County Auditor/Controller’s Office, County Counsel’s Office and CAO’s office regarding this matter.