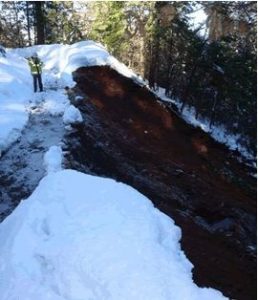 Sonora, CA– The Tuolumne Utilities District is asking customers in the Big Hill and Columbia area to conserve water.

Last Friday, TUD crews were alerted to a ditch failure on the Columbia ditch system after a 60 foot section of the ditch gave way due to the recent snow storms.

The section of TUD’s ditch distribution system flows water from the Columbia ditch to the water treatment plants that serve residents in Big Hill and Columbia. TUD says that until this part of the ditch system is restored, water conservation is being requested.

"We’re putting forth every effort we can," said TUD General Manager Pete Kampa. "The county’s been very cooperative, the state office of emergency services has helped out and we continue to make progress."

TUD crews have been working in the area clearing snow to get supplies in to repair this section of ditch. TUD has contracted with inmate baseline crews from Vallecito and Tuolumne to assist in the repair which includes hand shoveling an estimated nine miles of snow that is in the Columbia ditch. An estimated two to five baseline crews have also been assisting in the repair.

Kampa says that on Wednesday, 100 feet of temporary pipe will be flown in by helicopter to the rugged terrain. Weather permitting, TUD hopes to install this pipe and have water back into the Columbia ditch by Friday.