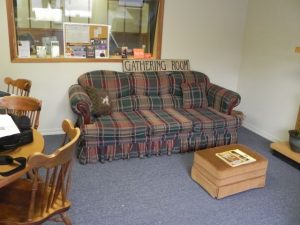 Sonora, CA – A past director of VNA Hospice is the President of a new medicinal marijuana collective that is open in East Sonora.

Today’s Health Collective is located in the Via Este Suites. It is operated by President Sara Herrin, CFO/Retail Manager Jana Evans, and Vendor Manager Nancy Smith. Herrin, an RN, is the former head of VNA Hospice. She says the focus is on health, and feels that Marijuana is effective in treating conditions like nausea and spasms. She says there are also a lot of cancer patients that rely on the drug.

“It’s an alternative to many addictive drugs,” says Herrin. “There are multiple uses for marijuana, which are non-addictive.”

Herrin encourages members to eat the drug, and not smoke it. She says eating the drug can have a longer lasting effect, and it is healthier than smoking.

When entering the collective, a security guard first checks that the patient has a county issued medicinal marijuana card or a referral from a physician. Inside there are marijuana themed products, medicinal food items and various varieties of marijuana. There is also a security system in place to guard the medicine throughout the day and after hours.

Marijuana collectives are a controversial topic in Tuolumne County. The City of Sonora and Tuolumne County are working to draft a joint ordinance regarding medicinal marijuana operations. The City of Sonora implemented a 10 month moratorium on clinics after another goup, Foothill Care Collective, announced plans to open a dispensary on Mono Way. FCC opened despite city warnings.

THC is located outside the City Limits of Sonora in the County’s jurisdiction. THC received a mix response from some county officials prior to opening, and Herrin says she is “hopeful” that THC can be involved in the process to create the ordinance for the city and county. She notes that THC has been “warmly welcomed” by surrounding businesses in the Via Este Suites.

Besides being a medicinal marijuana dispensary, CFO/Retail Manager Jana Evans notes that the collective plans to offer classes in the future so that people can learn to deal with pain through avenues such as art, writing and creativity.