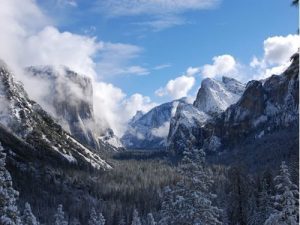 Yosemite, CA – Yosemite National Park Officials report after searching nearly three days for the plane there is still no sign or signal from the missing plane. The Pilot, 68 year old Nicol Wilson of Santa Barbara, took off alone from Santa Barbara headed towards the Mammoth Lake Airport on Monday. When he didn’t arrive that afternoon his family reported him missing.

Most planes are equipped with an Emergency Location Transmitter (ELT) which is a device that sends out a signal from the plane. Park Ranger Kari Cobb says, “The plane did have an ELT. We have tried and continue to try to pick up any possible signal from an ELT, but have not been able to pick one up. This specific area in the park is very hard to get a signal from even if one was being given out because of the rough terrain. There are a lot of peaks and valleys and what can happen is that signal can bounce off multiple peaks therefore sending searchers and aircraft in the wrong direction.”

Nearly 60 personnel involved in the search. Several aircraft are being used including a helicopter from the California Highway Patrol and two fixed-wing planes piloted by the Civil Air Patrol.

Cobb says they will search until dusk today over the North Dome area of the park where the plane went off radar. She says a ground search is still not option as the snow is too deep. Cobb says they are monitoring the weather carefully as snow storms could move into the area Friday afternoon and force them to call off the search.