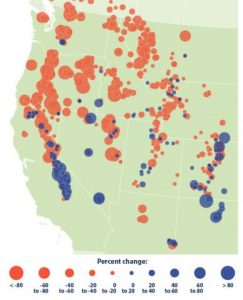 A new report details the historic economic impact of low versus high snow years in an effort to warn policy makers of the ski industry’s current economic scale and the potential economic impact that climate change may cause.

The recently released study titled “Climate Impacts on the Winter Tourism Economy in the United States” by the environmental advocacy groups: Protect Our Winters in Pacific Palisades and the Natural Resources Defense Council in New York documents the past economic impact of high and low snow years.

The study put California second behind Colorado for economic benefites from winter sports tourism. California was listed as having 24,000 employed in snow related jobs and $1.4 billion in economic value added from and estimated 7.5 million skier visits.

In the last 10 years the study found a 5% decrease in the number of visits between high snowfall years and low snowfall years. The resulting resort revenue loss was $100 million across the state of California and 1,200 fewer jobs.

Locally, Spokesperson for Bear Valley, Rosie Sundell, says snow making machines have “been a huge benefit for us.” She noted, “infact last year with that lack of snow some people don’t realise we were actually open 120 days because of that snow making. So it is a big benefit to our pass holders.”

Dodge Ridge began last season on January 25th. It was the latest opening in 12 years with around 200 inches of snowfall that season. A typical year sees anywhere from 300-400 inches but two seasons ago, 2010-2011, local resorts reported around 600 inches of snow for the season.

Bear Valley opened last season on December 16th, this year they will open on December 20th. Last season both resorts remained open until April 24. They typically close in early April. Two years ago, with the heavy snow, the resort closed weekend of April 18th.

The EPA chart and details are here.