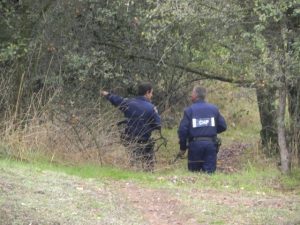 Sonora, CA – Reports of gunfire caused a scare at two Sonora Schools. Both Sonora Elementary and Cassina High School were on lockdown for about an hour and a half. Sonora Police were called to the scene around noon after a teacher at the elementary school reported hearing gun shots outside. Sonora Police say 16 officers searched the woods behind both schools, but found no gunman and no signs of any gunfire.

Sonora Police chief Mark Stinson says the gunfire may have come from a private shooting range on the top of Bald Mountain Road. Stinson says, “There is a shooting range just outside the city limits and it’s near the area of the school. There was training going on at the range at this time and other people in the area had reported hearing shots fired in the same area. This is not the first time this incident has happened. The schools have been locked down before because of shooting going on at this particular range.” Stinson says the range does call the department when they will be shooting, and did advise them of the training today.

There were no injuries in the incident. Tuolumne County Sheriff’s Deputies and Jamestown CHP officers also assisted.