No Decision On Biological Review Guide 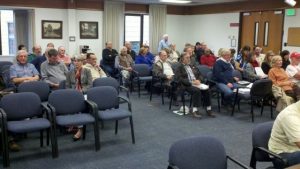 Sonora, CA — Environmental rules and regulations were in the forefront at the Tuolumne County Supervisors meeting this afternoon.


The Board held a public hearing this afternoon on an update to the Biological Resources Review Guide. After two and a half hours of debate, the Board continued the public hearing until the December 18th meeting.

The guide is designed to be an optional program for developers dealing with state and federal environmental regulations. Many people argued that it has not reached the stated goal of streamlining the process, and felt that there was too much influence by the State Department of Fish and Game. The debate centered on protected species and oak tree mitigation.

Some praised the document, but still had concerns that it loosened regulations too much. They included John Buckley of the Central Sierra Environmental Resources Council and Sharon Marovich of the Tuolumne County Heritage Committee.

The guide was originally created in 1987, and referred to as the Tuolumne County Wildlife Handbook. It was later revised in 1996.

Supervisor Dick Pland told everyone in attendance that the final document would not be expedited, and a final vote would not come at the December 18th meeting. Many of the opponents had argued for a 60 day review period, which put the vote in the hands of the new Board after the first of the year. Pland and Bass will be replaced at that time by Karl Rodefer and Sherri Brennan.