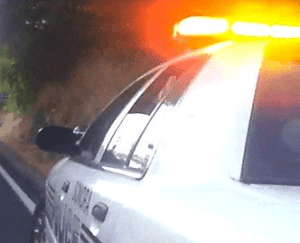 Sonora, CA – A Sonora resident was startled to find a stranger helping themselves to some juice in her fridge.

After hearing a noise downstairs just before eight last night (Thursday), a homeowner went to investigate and discovered a woman standing in her kitchen. The refrigerator door was open and the intruder was gulping out of a juice carton. When the resident confronted the woman and threatened to call police, the suspect allegedly shoved her and threw some juice on her while also pouring some on the floor. The suspect then tossed the carton at a car while running from the home.

The homeowner reported what had transpired to Sonora Police Officers when they arrived at her house located in the 900 block of Cemetery Lane off of Barretta Street. While searching the area, officers noticed a woman that fit the intruder’s description, but she ran as the patrol cars approached. Minutes later she was stopped and initially gave a false name and birth date to police. She was subsequently identified as 41-year-old Zoe Patane of Sonora.

Patane was arrested for burglary of an occupied home, battery, obstructing an officer and vandalism/damage of property. Her bail was set at $50,000.