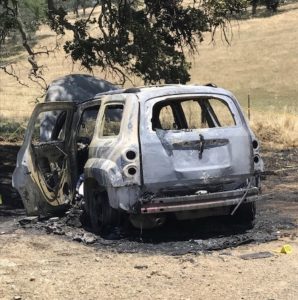 Update at 9:15am: In an update to the earlier story, Sgt. Greg Stark with the Calaveras County Sheriff’s Office tells Clarke Broadcasting that the man arrested late yesterday, following a standoff with officials, has been identified as 41-year-old David Joseph Fagundes of Washington State. An autopsy will confirm whether the person found dead in the burned car was a male or female. Additional details are in the story below:

Original story posted at 6am: Copperopolis, CA — There is a criminal investigation underway after a body was found in a burned vehicle on Lower Telegraph Road near Highway 4.

We first reported on the crash yesterday morning, as it occurred during the seven o’clock hour. The Calaveras County Sheriff’s Office reports that the body was located after the fire was extinguished. The exact cause of death is undetermined at this time.

Investigators and CAL Fire officials remained on scene throughout the day, and at one point spotted a male in a nearby field trying to hide. Detectives approached him while he was in some high grass, and he declined to comply with their demands.

The sheriff’s office adds, “The subject stated he was armed with a firearm and was making threats toward law enforcement and suicidal statements. The subject was hiding in an area right off Highway 4 and Telegraph Road west of Copperopolis.”

It is unclear at this time if he is the same person who was attempting to extinguish the fire. The SWAT Team, and K9 Knox, responded, and he was taken into custody.

The suspect’s identity has not yet been confirmed, and an autopsy regarding the death of the victim is pending. We’ll pass along more information as it becomes available.