Calaveras Homeless Programs Gearing To Assist ‘Those Who Help Themselves’ 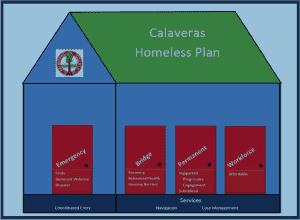 At Tuesday’s meeting, the board of supervisors heard at length from Calaveras County Homeless Task Force spokesperson Kristin Stranger, whose presentation provided extensive follow up on progress made since the task force appeared before the board last December.

The task force, which has been meeting for about a year, involves a broad range of participants: members of the business community; city partners; faith-based and community-based organizations; county government agencies; the Office of Education; employment and training providers; the health care community; homeless residents and advocates; tribal partners; and the U.S. Forest Service.

Along with what Stranger described as a multitude of resources coming down over the past year from the state, she noted the county’s faith-based partners stepping up to provide services such as showers and homeless camp cleanup.

The most recent point-in-time count earlier this year, in which many community partners helped, provided more accurate numbers than the previous count that only identified 19 people. According to the count, Calaveras County identified 186 individuals as meeting the HUD definition of homeless, a definition that Stranger said varies, based on the agencies who are supplying various program funds. The count identified an additional 35 as “couch surfers” in need of stable housing. Stranger reported that Calaveras has no distinct county area that had more of a homeless population.

“We don’t really have a distinct city center like…Jackson and Sonora, so our service delivery has to look a little more different here in Calaveras County because we have very distinct communities that are scattered throughout our entire county,” Stranger maintained. She emphasized, “Homelessness is not a county issue that the county is responsible for solving nor is it a faith-based issue for faith-based partners. It is really a community issue, necessitating everybody having a piece of it in order to address that need here.”

District 5 Supervisor Ben Stopper advocated his support for homeless solutions built around recovery. “We need to support the people who want to support themselves,” he stated. District 4 Supervisor Dennis Mills expressed caution towards ensuring the county’s ability to sustain and maintain housing development programs down the line.

District 3 Supervisor Merita Callaway shared when asked some time ago to help a family facing eviction, she was embarrassed to learn that while Calaveras had no temporary shelter, Tuolumne and Amador both had facilities in place that sometimes provided help for Calaveras County homeless. She stressed, “I felt we were never doing our share for our residents.”

The HEAP funding is allowing the construction of approximately ten tiny houses across “scattered” sites in San Andreas on the county government campus by the Behavioral Health building as well as in West Point. They will feature a coordinated entry system and operate under intensive case management support teams. The decision is a departure from community models in nearby Amador and Tuolumne counties, which operate large shelters. Homeless individuals and families who are involved making their own transitional plans will be eligible to stay in one of the tiny houses for a maximum of six months while working with case workers and support agencies.

Next steps include rezoning the West Point property offered by task force member group, the Blue Mountain Coalition for Youth and Families (BMYCF) at 174 Spink Road, enabling its use as one of the sites. The supervisors voted unanimously to move that forward at an estimated cost of under $5,000 from the General Fund. Plans are to get bids and finalize the program’s administrative plan and contract by sometime this winter.

The supervisors also passed a resolution to declare a shelter crisis, which besides allows tapping of state and federal funding, loosens some housing standards and establishes a legal basis for using certain county-designated facilities as shelter.