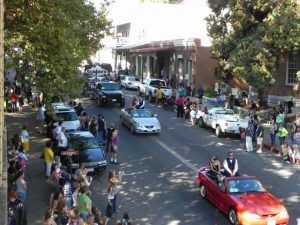 
The roadway will be closed to all traffic from around 2:15 p.m. to 3:00 p.m., between Snell Street and Church Street. Also, School Street will be closed from 1:30 p.m. to about 2:15 p.m. for parade staging and no parking is allowed on Green Street between Yaney Street and Stockton Road during the parade. Police say these areas have been posted with “No Parking” signs.

Here’s the route of the parade: It starts at Sonora Union High School and enters Snell Street from School Street then heads south down Washington Street. It will then turn right onto Stockton Road, then right again onto South Green Street and end at the Courthouse Park. That’s where the Golden Regiment Band will perform for about 15 minutes. Police say during the band’s performance, Green Street will be closed between Bradford and Yaney Streets.

Sonora Police Chief Mark Stinson says “We’re asking that you plan ahead and use alternate routes. Also, we need drivers to be patient, as traffic flow will be extremely slow and congested in the downtown area following the parade”.

Click here for a map of the parade area.