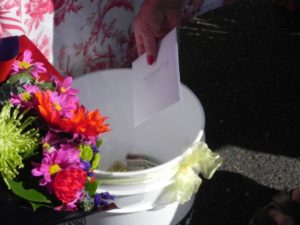 Sonora, CA – – There was a long line of vendors and customers at Sonora’s Certified Farmers Market to pay their respects to a man they called “The Flower Man”.

49 year old Eleazar Rodriguez of Galt died in the head on crash on Highway 49 near the Carol Kennedy Road intersection in San Andreas on September 29th.

This Saturday a memorial tribute to Rodriguez, with flowers and a picture of him, was set up where his flower stand use to be at the end of the market. There was also a book to sign condolences to his family and a donation bucket.

Donna Owings of Twain Harte says she donated, “Because I’m sure they need it and he was such a wonderful man. I’ve been buying flowers from him for about six years and he was such a great family man and he worked so hard.”

Sonora Certified Farmers Market Supervisor Erin O’Hare says, “There’s a tremendous amount of people coming out to support Ed and his family. The line has been long all morning since 7 o’clock, non-stop. There were a lot of people crying and hugging in disbelief. I was too. All morning I kept thinking, oh he’s just going to drive in, his trucks going to be here. It’s hard to accept.”

O’Hare says many of the vendors are giving all or part of this Saturday’s sales to the family as well. The memorial will be up at the market for the next two Saturdays. If you can’t make it to the market, but still want to donate you can send a check to:

Rodriguez’s 10 year old daughter suffered major injuries and was air-lifted to UC Davis Medical Center. This past Wednesday she was released from the ICU.

Also killed in the crash was 52 year old Penny Miles of Murphys. CHP says she was intoxicated at the time of the wreck.