A Memorial For “The Flower Man” 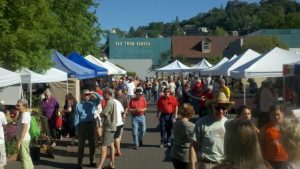 San Andreas, CA – Vendors at Sonora’s Certified Farmers Market are mourning the loss of a man they called “The Flower Man”. 49 year old Eleazar Rodriguez of Galt died in the head on crash on Highway 49 near the Carol Kennedy Road intersection in San Andreas. His 10 year old daughter suffered major injuries and was air-lifted to UC Davis Medical Center. Sonora Certified Farmers Market Supervisor Erin O’Hare says “The daughter has a lot of broken bones, but she is getting out of the ICU today.”

O’Hare says to honor Rodriguez they are going to have a memorial set up at Saturday’s market. O’Hare says “He was a very gracious man and a favorite vendor here. Down where his stand was we are going to have a memorial tribute with flowers and a picture of him.” She adds, “There will be a collection container where people can drop off any donation or memento you would like. All the donations will be given to the family as he was just a humble farmer and the sole supporter of his family.”

O’Hare says many of the vendors are giving all or part of Saturday’s sales to the family as well.
Also killed in the crash was 52 year old Penny Miles of Murphys. CHP says she was intoxicated at the time of the wreck.