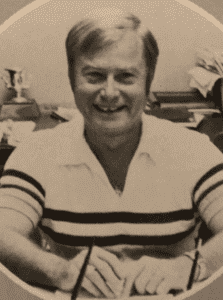 Sonora, CA — A local school district’s gratitude to the long-time lead educator who helped shape it were enduring enough for it to name its high school stadium after him.

Word of Dr. Richard “Dick” Thorsted’s recent death is now circulating around the Mother Lode. The 87-year-old Twain Harte resident passed away in Palm Springs due to heart-related issues in early April, according to his obituary. Described as active and happy until the end, “Doc T,” as many called him, enjoyed life with his family and friends, splitting his time between the Mother Lode and Indio.

This week, upon learning of his passing, some of his former colleagues expressed sadness while stressing the significant positive impacts Doc T had on local education and the community during the 13 years Thorsted served as Summerville High School’s principal and superintendent while also contributing as a member of the Twain Harte Rotary. They also shared old yearbook photos of their mentor and friend (viewable in the image box slideshow).

Former Groveland-Big Oak Flat Superintendent Dave Urquhart, who before landing that job, worked for years along with Thorsted at Summerville. “I found him to be such a strong educational leader and he was really able to get Summerville High going in an academic way with an emphasis on more kids going on to higher education – and he was also involved at the state level in education matters,” he recalls. “He was the type of boss you wanted to listen to because you know he had good advice.”

Urquhart adds that Doc T, as a member of the Twain Harte Rotary, was also famously responsible for acquiring lights for all of Summerville’s athletic fields, enabling night games.

Summerville’s ‘Best Thing That Ever Happened’

Wayne deGennaro, who taught for 38 years at Summerville, served during Thorsted’s entire 1977 through 1990 tenure. “He was the best thing that ever happened to Summerville High School….a wonderful man, very intelligent…well-educated. He really cared…and did whatever he could to make sure that kids were treated right, that they got a good education, and that teachers were well-compensated and treated with respect,” he reminisces.

“It was a real blessing to have him as a principal and superintendent. He and his wife Frankie were a really great team, paid for the fireworks at graduation each spring, and were really involved in the community…real supporters of the Summerville High Foundation.”

Tuolumne County Superintendent of Schools Cathy Parker, adds, “He was a beloved administrator…and even stepped in from time to time to fill in when school districts were looking for administrators. I got to know him when he stepped in at Curtis Creek as an interim principal about 20 or more years ago.”

Born on June 17, 1931 in Berkeley, Thorsted grew up there and in Mariposa, where he attended high school and met his future wife, who was from Coulterville. A graduate of San Jose State, he went on to earn his master’s degree from San Francisco State and PhD from UC-Riverside.

Besides his wife, son Steven Thorsted and daughter Jan Thorsted, three grandchildren, and two great-grandchildren survive him. His family indicates they are not planning any services but to privately scatter his ashes.