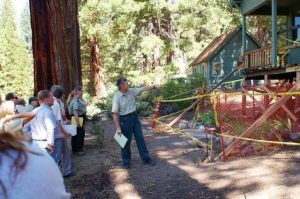 Sonora, CA — In response to three human caused fires that escaped recently in the Bear Lake area of the Emigrant Wilderness, the Forest Service announces that fire danger potential is increasing at the higher elevations of the Stanislaus National Forest.

Fire restrictions are now in effect for the high and moderate hazard areas of the Forest. Stanislaus Forest Public Affairs Officer, Jerry Snyder says “The low hazard, high elevation, areas of the Forest have been spared the restriction so far.” Snyder also noted, “higher elevations of the Central Sierra Nevada received only about 50% of its typical snow pack this year causing fuels to dry out earlier than normal.”

Snyder says restrictions are actively enforced by Stanislaus Forest Law Enforcement Officers and Fire Prevention Specialists. Persons who knowingly violate these restrictions on open sources of fire may be cited by Forest Officers. Snyder also states that individuals responsible for an escaped campfire could face paying the costs of fire suppression operations.

National Forest Officers are preparing for deer hunting season which begins September 15th. Snyder’s advice, “Wilderness campers and hunters should ask themselves if a campfire is necessary at all. Backpacking stoves are affordable, quite efficient for cooking, easy to carry and do not produce sparks.”

Stanislaus National Forest Supervisor, Susan Skalski, says “We need the public’s help here. People need to be very careful and take appropriate precautions to ensure their campfire doesn’t escape and is dead out when they leave their campsite. Forest visitors can also help by keeping a good lookout for smoke and report suspected wildfire with locations and descriptions by calling 911.”