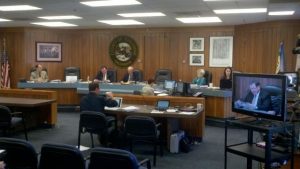 Sonora, CA — More details are coming out about the Cooperstown Quarry settlement agreement.

As reported yesterday, the Tuolumne County Supervisors approved an agreement to settle lawsuits filed by the City of Riverbank and local environmental groups.

The quarry owners will pay Riverbank $0.07, per ton, for all products and material extracted from the site. It includes paying a $500K advance on the per ton fees over the course of the first five years. Riverbank had complained about the additional railroad traffic that will result from the project.

The second lawsuit from the two environmental groups, Friends of the Mother Lode and The Central Sierra Environmental Resource Center (CSERC), argued that the county should have required the developers to complete a full Environmental Impact Report.

John Buckley, Director of CSERC, has released a statement detailing many items the group fought to include in the settlement. A major concern was blasting that could occur late at night. Buckley states, “The positive final agreement means there will be no nighttime blasting, rock processing, or rail car loading – noise that would have rippled at night for miles across the foothill landscape. Thanks to CSERC, there will also now be 37 acres of additional long-term open space protection given to oak woodland habitat. And despite strong skepticism from county supervisors, there will also be major payments by the mining company to fund public transit or to otherwise reduce greenhouse gas emissions in this region.”

Starting in year five of the mine operation, the owners will pay the county around $10K a year to fund projects that the county determines will reduce greenhouse gas emissions or private vehicle use. This would likely include public transit. The settlement also requires the mining company to hire an independent consultant to test three rock samples for asbestos, every time a new area of the site is mined.

It is a stark difference in opinion from Board of Supervisors Randy Hanvelt and Dick Pland, who referred to the settlement as “extortion.” To read the earlier article, click here.