Some Crews Released From Penn Fire 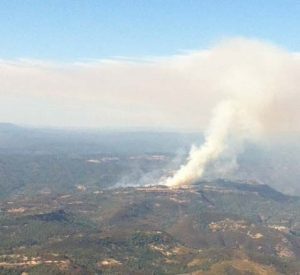 Murphy’s, CA — CAL Fire is releasing some crews from the Penn Fire near Murphys and sending them over to the Graham Fire near Groveland. They say they have let go over 200 firefighters.


CAL FIRE reports the 134 acre fire is currently 60 per cent contained. One building was destroyed and 12 homes were threatened.

CAL Fire Spokesperson Nancy Longmore says “We’re getting a better handle on the Penn Fire so we cut the number of firefighters in half. However, some of those crews are being assigned to the Graham Fire.”

CAL Fire expects the Penn Fire to be fully containment by sometime tomorrow. The cause of the fire is still under investigation.

The 100 acre Graham Fire, northeast of Groveland, is now 20percent contained. 20 residences have been alerted they may need to evacuate. The homes are by Clifton Way and Clements Road. 481 firefighters are still on scene. CAL Fire says some of the personnel have come from as far away as Orange County.

It is unknown when the fire will be contained. CAL Fire says it has been difficult to fight because it‘s hard to get access to some areas of the blaze. They say they are relying heavily on air tankers and helicopters. There are also 49 engines and 16 crews helping with the effort.