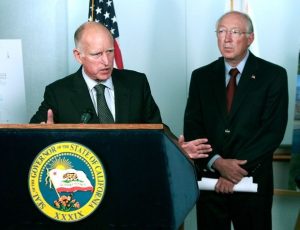 The Governor is proposing to construct a pair of tunnels to carry water from the Sacramento-San Joaquin Delta to a pumping station, and eventually to cities and farmland. The Governor’s office is putting the price tag at $14 billion.

The Governor is proposing that construction start in 2017, with the project to be completed by 2026. It has the support of the Obama Administration, as U.S. Interior Secretary Ken Salazar was on hand for yesterday’s announcement in Sacramento.

The 33-ft. diameter tunnels would carry water nearly 40 miles from Sacramento River to federal and state pumps in Tracy. It would then be fed to canals that carry water to some parts of the Bay Area and all the way down to San Diego.

The Governor is calling it a path forward for the Bay Delta Conservation Plan and California’s water future.