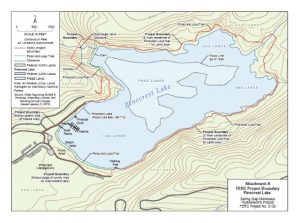 Yesterday the final revision of the Shoreline Management Plan for Pinecrest Lake was released.

It lists rules and regulations designed to improve the visitor experience at Pinecrest Lake. When the initial Draft Plan was released earlier this year, a contentious issue was to implement a permit system limiting the number of boats that could be parked along the shore. The initial proposal was to allow only 20 at a time, but the Final Draft has increased the number to 100. In addition, the 48 south and north shore recreation permit holders that do not have road access will have the opportunity to apply for one mooring buoy per residence, which could bring the total number to 148. A typical year finds around 150 boats moored along the shores of Pinecrest Lake.

Early plans to implement the 20 boat permit system were a point of heavy criticism at public meetings held in the spring. It is noted that the SMP will start concentrating the 100 mooring buoys for the general public in two specific areas, in an effort to reduce the amount of shoreline where boats are tied up. It should be noted that the spots are in addition to what is stored in the marina area and the lakeside cabins that sit against the lake.

The SMP was put together by the Stanislaus National Forest and PG&E. Development of the plan was required as part of the licensing agreement with the Federal Energy Regulatory Commission. The Forest Service manages recreation facilities at the lake and PG&E manages the lake for hydroelectric power generation purposes.

The entire 60 page document can be found by clicking here.