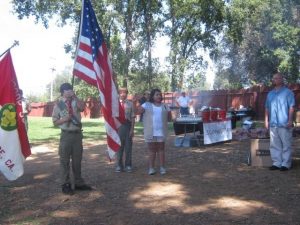 An informal poll on myMotherlode.com asked “Do You Agree With The Boy Scouts: Open or Avowed Homosexual Members Distract From Their Mission?” 66% said yes, 32% said no.

According to the Boy Scouts of America (BSA) their mission is to prepare young people to make ethical and moral choices over their lifetimes by instilling in them the values of the Scout Oath and Law.

The Scout Oath is:

On my honor I will do my best
To do my duty to God and my country
and to obey the Scout Law;
To help other people at all times;
To keep myself physically strong,
mentally awake, and morally straight.

Boy Scout Motto is “Be Prepared!” and the Boy Scout Slogan is “Do a Good Turn Daily!”

After a confidential two-year review, the Boy Scouts of America reaffirmed its policy of excluding gays, despite relentless protest campaigns by critics.

The Scouts’ national spokesman, Deron Smith, told The Associated Press that an 11-member special committee, formed discreetly in 2010, concluded that the exclusion policy is “absolutely the best policy” for the organization.

Smith said the committee, comprised of professional scout executives and adult volunteers, was unanimous in its conclusion – preserving a long-standing policy that was upheld by the U.S. Supreme Court in 2000.

The 5-4 Supreme Court decision upheld the Boy Scouts right to freedom of association in spite of state anti-discrimination laws. They ruled that the organization’s policy for scout leaders to not discuss sexuality with scouts was sufficient grounds for them to ban openly gay leaders.

Their conclusion was, “While the law is free to promote all sorts of conduct in place of harmful behavior, it is not free to interfere with speech for no better reason than promoting an approved message or discouraging a disfavored one, however enlightened either purpose may strike the government.”

The dissenting opinion written by Justice Stevens says, “it is plain as the light of day that neither one of these principles-‘morally straight’ and ‘clean’-says the slightest thing about homosexuality. Indeed, neither term in the Boy Scouts’ Law and Oath expresses any position whatsoever on sexual matters.”

The poll results can be viewed here.