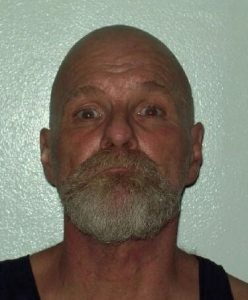 A Sonora man has been busted following a lengthy investigation.

On November 28 of last year, a device that looked like a bomb was found outside the Tuolumne County Courthouse during the morning hours. The item was located in a canvas bag and consisted of three red cylinder type objects that were taped together. There was a wire running from the cylinders to a black box, which was also attached to the cylinders.
The Courthouse was evacuated for approximately two hours, until the Calaveras County Bomb Squad determined that the device was inert.

Parts of the device were sent to a California Department of Justice Lab for forensic analysis. Sonora Police Chief Mark Stinson says lab workers were able to find DNA evidence belonging to Terry Keever, 55, of Sonora.

Records indicate that Keever was in court on the day of the incident and was placed into custody on an unrelated matter. Archives show that Keever had been arrested one week earlier in connection to an East Sonora burglary.

Stinson notes that during the investigation period into the fake bomb, Keever had actually contacted the SPD and tried to implicate someone else as being responsible for the crime, in an effort to receive a reduced sentence for his original crime.