Students “Fit For The Future” 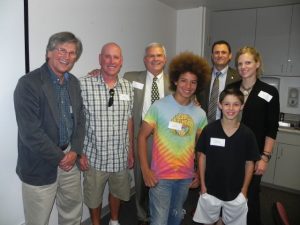 Sonora, CA — Area students are embracing the idea of living a healthy lifestyle.


“Fit For The Future” is a program that started this year in Tuolumne County, with a stated goal of “defeating childhood obesity.” Targeting students in the 5th and 7th grades, the program consists of three parts including student assessment, fitness activities, and nutrition.

The program was coordinated by the Tuolumne County Superintendent of Schools Office, Sonora Regional Medical Center and Tuolumne County Public Health. In year one it was launched at Curtis Creek Elementary, Jamestown Elementary and Twain Harte School. A luncheon was held earlier this week to celebrate its success.

Brie Newton was the Fit for the Future Program Coordinator and spent time at all three schools. She received high praise at the luncheon, from the supporters, for inspiring the students, and pushing them to reach their goals. “The success level was huge, and it exceeded our expectations,” says Newton. “Students were tested in a variety of categories at the beginning of the year, and most everyone made significant improvements.”

Tests included knowledge about the basic food groups, to running the mile and doing curl-ups. The students received an overall score on a scale of zero-to-six.

“We were expecting just a small percentage increase in the number of students that received a six out of six,” says Newton. “We went from eight percent of the students at the beginning of the year, to 49 percent at the end.”

County Health Officer Dr. Todd Stolp says childhood obesity is one of the largest problems facing youth. Many times the habits learned at a young age carry over to the adult years. “The kids pushed themselves to reach goals, that many of us thought could have been impossible,” says Dr. Stolp. “The kids were inspired, decided that they were going to do it, and did it.”

Two students invited to speak at the luncheon were Levi Lowe and John Mlekush. It was noted that both can now run a mile in the six minute range, and were student leaders in helping to make the program a success.

Superintendent of Schools Joe Silva announced at the luncheon that the program will continue next year thanks to the commitment from Sonora Regional Medical Center and President and CEO Jeff Eller. Silva noted that the plan is for “Fit for the Future” to be offered at all schools in the county that wish to participate.

School leaders noted at the event that healthy living helps students improve emotionally and academically. It has been a challenge over recent years as many schools nationwide are cutting back on programs like P.E.