Annular Eclipse from the Mother Lode 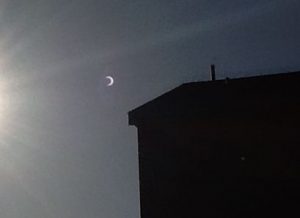 Locals, along with millions of people across Asia and the western United States, saw an annular eclipse cross the sky. Residents in the Mother Lode saw a partial blocking of the sun Sunday evening.

In the direct path of an annular solar eclipse the moon passes in front of the sun, blocking everything but a bright ring of light. The Mother Lode was south of the center of the path of the eclipse but the sun was partially blocked by the moon, creating a crescent shape. The conditions for an annular solar eclipse work out about once every six months but the U.S. hasn’t seen this since 1994.

A total eclipse occurs when the moon is slightly closer to the earth blocking all but the outer corona of the sun. The next total solar eclipse is August 21, 2017 crossing the entire united states from the Portland, Oregon area in a path all the way to South Carolina. Nasa’s map is here. The total solar eclipse will block the sun for over two minutes and be the first visible from the contiguous United States since 1979.

Nasa’s map of Sunday’s annular solar eclipse is here. The eclipse was viewed over parts of Oregon, Northern California, viewing parties were held in Reno, Nevada and the path continued over Utah, Arizona, New Mexico and Texas.

According to the Associated Press, in some parts of the U.S., special camera filters for taking photographs have been sold out for weeks in anticipation of the big event. The eclipse was broadcast live on TV in Tokyo, where such an eclipse hasn’t been visible since 1839.