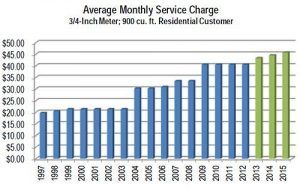 It would take a majority vote of the Board of Directors (three) to approve the new rates.

The previous rate plan was scrapped following an outcry by members of the public. That proposal called for six tiers of rate increases, designed to close a $2 million deficit.

TUD is developing a 20-year-plan to streamline the way that treated water gets to customers. For more read “Too Many Treatment Plants?” here.

T.U.D. employees agreed to changes in employee wages and benefits as reported on March 30th here.

Listen to the November Mother Lode Views interview with Pete Kampa about the proposed water rate increases archived in the multimedia section here.