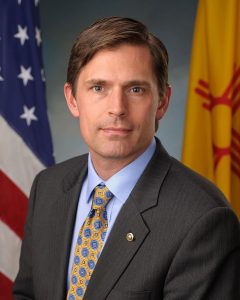 During the Democratic Weekly Address, Senate Intelligence Committee member Martin Heinrich (D-NM) stated that President Trump has lost the trust of the nation.

Heinrich was Tuesday’s KVML “Newsmaker of the Day”. Here are his words:

“President Donald Trump has lost the trust of the nation he swore to protect and defend.

As the Special Counsel Robert Mueller’s report lays out, in painstaking detail, there was rampant criminality surrounding President Trump’s campaign and his administration. During the course of the investigation, the Special Counsel’s team indicted or got guilty pleas from 34 individuals and three companies. But the criminal-and criminally incompetent-behavior was not limited to these indictments and guilty pleas.

Senate Democrats are focused on examining the Special Counsel’s findings and holding others in this corrupt and chaotic Administration accountable. Many damning facts have already been revealed over the course of this investigation. Indisputable intelligence has established that a systematic, wide-ranging Russian election interference operation aimed to bolster President Trump’s campaign. Many in the Trump orbit, including Donald Trump himself, openly sought to benefit from and even encouraged Russia’s interference in our election. The report details extensive interactions between individuals associated with a hostile foreign government and Trump associates who sought to benefit President Trump’s campaign and personal business interests. The president and his team then repeatedly lied to the American people and tried to cover up these reckless and criminal activities. When looking into the question of obstruction of justice, the Special Counsel found that President Trump engaged in multiple efforts to hinder the investigation into Russian interference. In a number of cases, the report finds plenty of evidence to support a charge of obstruction of justice.

It is now Congress’s job to conduct the oversight hearings and investigations necessary to hold President Trump and his administration accountable. Congress needs the full, un-redacted Mueller report. Robert Mueller should testify before the Senate Intelligence Committee. We need more information – not less – to help the American people understand what really happened here.

But the American people also need to understand that what we already know is appalling. President Trump and his team have engaged in a shocking pattern of lies, incompetence, and obstruction. They have even lied about the Special Counsel’s report and what it says. It is now clear that we have a president who nefariously pursues his personal interests over those of the American people. Instead of waking up each morning to serve others, he instead lashes out at those who challenge his lies and self-serving dealings.

The American people deserve better. We deserve elected leaders who we can trust to protect our nation and help our families and communities succeed. There are serious issues that Americans expect their leaders in Washington to get to work on. Democrats are eager to develop solutions for income inequality, to address our growing climate crisis, and to invest in infrastructure and education to build an economy that works for all of us. But solving these challenges will be impossible as long as our president remains fixated on spending every waking hour padding his own pockets and saving his own skin.

The fundamental principles that our nation stands for-democracy and justice-are facing a critical test. We must be vigilant in defending all that our great nation stands for, which means fighting for the truth and ensuring the public can trust their elected leaders once again.”