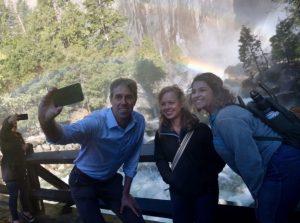 Yosemite, CA — California moved up its 2020 Presidential primary to March in hopes of gaining more relevance, and today one of the Democratic candidates is visiting Yosemite National Park.

Former Texas Congressman Beto O’Rourke is spending the day in Yosemite Valley, after holding campaign events over the weekend in both Los Angeles and San Francisco.

Hours ago he released a video on social media, shot from Yosemite Valley, to announce, as he calls it, “the most ambitious climate plan in the history of the United States.” He said it calls for cutting the country’s greenhouse gas emissions in half by 2030, and to zero by 2050.”

O’Rourke noted, “That means mobilizing five trillion dollars. It means investing in people and communities, and the technology that will allow us to be the leader in the world, and ensuring that we’re there for the next generation.”

O’Rourke has been touring the park this morning with Dr. Anne Kelly with the UC Merced Yosemite Station and Leslie Martinez, a Fresno based environmental advocate.