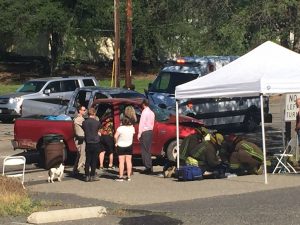 Sonora, CA – The CHP has released further details and identified the individuals, all from Sonora,  involved in a head-on crash on Tuolumne Road that ended with one of the drivers arrested for DUI.

The collision happened during the Wednesday afternoon commute just after 4 p.m. west of Hess Avenue, as reported here. 29-year-old Joel Westley Acker was driving a 2007 Dodge Ram 1500 westbound while 67-year-old Janet L. Alderman was driving a 2001 Ford F-150 eastbound.  CHP spokesperson Faustino Pulido reports that Acker drifted off the roadway into a drainage ditch and overcorrected sending his pickup over the double yellow line into the path of Alderman’s truck. The two vehicles hit head on.

Acker had minor injuries. Alderman was taken via ambulance to Adventist Health Sonora, and a passenger in her pickup, Lorraine L. Gilbert was flown to Doctors Medical Center in Modesto. Both suffered moderate injuries. A third passenger, 67-year-old Thomas Curtis, was not injured.

Pulido details that a DUI investigation ensued at the scene and Acker was subsequently arrested for drunk driving and causing bodily injury. His bail is set at $25,000.