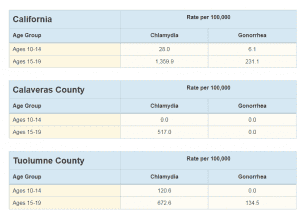 Public Health Officer Dr. Bob Bernstein says, “The data indicate some relatively good news for Gonorrhea, and some relatively bad news for Chlamydia, but potentially serious health effects for both, if not prevented in the first place, or if not identified early through counseling, testing and treating.”

Another concern of Dr. Bernstein, when looking at national trends, “Condom use among sexually active students decreased from 62-percent in 2007 to 54-percent in 2017, according to CDC’s Youth Risk Behavior Study, presenting a serious health risk for sexually transmitted infections including HIV.”

He notes that partnerships between CDC, state and local officials, along with faith-based organizations, are essential to help educate parents and teenagers about sexually transmitted disease risks.

He adds that the state’s “Healthy Youth of California Act” (AB 329) mandates that students receive comprehensive health and HIV prevention education at least once in middle school and once in high school.