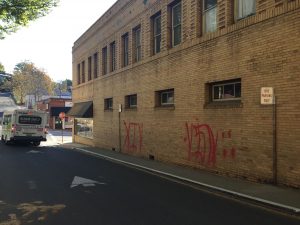 Graffiti on building near Courthouse Park

Sonora, CA — The Sonora Police Department is investigating multiple reports of vandalism throughout the city, over the past 24 hours, in which red spray paint was used to tag buildings.

SPD spokesperson Deborah Dills, says, “At this point we have found nine locations with red spray paint graffiti. Two of those nine have already been cleaned up. The investigation is ongoing. Currently there are no suspects.”

The two areas already cleaned up include outside the Intake Bar and Grill on Washington Street and outside Zane’s Iron Horse Lounge.

The most visible location this morning is a building on Washington Street, near the bus stop, next to courthouse park. The PD reports that other confirmed locations include the a retaining wall at the intersection of Mono Way and Hospital Road, at the Gold Country Gas, the Courthouse building at 60 North Washington Street, at 38 South Stewart Street, and along William Street.

The SPD reports that it is not immediately clear if there is any gang related affiliation with the tagging. Near Courthouse Park there was a visible XIV spray painted.