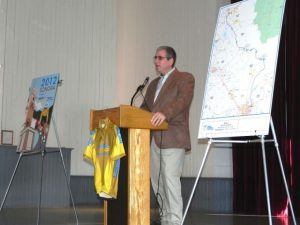 Sonora, CA — Additional details were released today about Stage Four of the Amgen Tour of California.

Stage Four will leave Sonora on Wednesday, May 16 and arrive in Clovis later in the afternoon. At 130 miles, it is the longest stage of the 2012 tour.

“It is going to be a great route,” says Canning. “Hopefully we’ll be able to get the big screen TV’s downtown so that people can watch those mountain climbs, because there are going to be some hard pulls going down by Lake McClure and up by Mariposa.”

The fourth leg will begin at Courthouse Park in downtown Sonora. Bicyclists will quickly pedal down Washington Street, over Highway 108, to Lime Kiln Road before turning right onto Campo Seco. South of Jamestown, the bicyclists will travel down Jacksonville Road, over Lake Don Pedro and then turn left onto Highway 120 towards Moccasin.

At the southern junction of Highway 49 and 120, bicyclists will turn right and make their way up Highway 49 to Coulterville and then follow the highway as it winds through the towns of Mariposa and eventually Oakhurst. On Highway 41, bicyclists will travel out of the Sierra foothills before ending this leg of the race in the Fresno suburb of Clovis.

Running the race along Priest Grade was considered by the organizers, but they ruled it out because it would be too challenging for an early stage of the race.

The tour announced today that defending champion Chris Horner and three-time winner Levi Leipheimer will be participating again this year.

The public is invited to a route announcement reception from 5-7pm, Thursday, at the Sonora Opera Hall. It is a chance to learn about volunteer opportunities and upcoming events to promote the race. A local video showcasing the route will also be shown. The community is invited to attend.