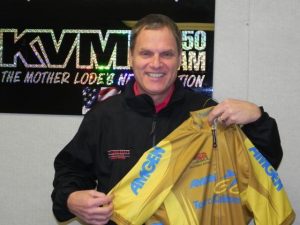 Excitement is building in Sonora for the upcoming Amgen Tour and now we know the route.

Darrell Slocum, Media PR Marketing Director for the Sonora Stage of the Amgen Tour, was Wednesday’s KVML “Newsmaker of the Day”.

Sonora has been selected as the May 16th starting point for the fourth leg of the eight day 750 mile race. Amgen officials expect upwards of 10,000 onlookers to be present at many of the starting points.

This morning Amgen officially released the exact route from Sonora to Clovis.

The fourth leg will begin at Courthouse Park in downtown Sonora. Bicyclists will swiftly pedal down Washington Street, over Highway 108, to Lime Kiln Road before turning right onto Campo Seco.

South of Jamestown, the bicyclists will travel down Jacksonville Road, over Lake Don Pedro and then turn left onto Highway 120 towards Moccasin.

Although the residents of Big Oak Flat and Groveland were hoping that the tour would travel up either Old Priest Grade or New Priest Grade, the route will go up neither.

At the southern junction of highway 49 and 120, bicyclists will turn right and make their way up Highway 49 to Coulterville and then follow the highway as it winds through the towns of Mariposa and eventually Oakhurst.

On Highway 41, bicyclists will swiftly travel out of the the Sierra foothills before ending this leg of the race in the Fresno suburb of Clovis.

The Amgen Tour of California is the largest bicycle race in North America, it starts May 13 in Santa Rosa and ends on May 20 in Los Angeles.

A Route Announcement Reception open to the public will be held on Thursday February 9th from 5 to 7 PM at the Sonora Opera Hall in downtown Sonora.

Details for Amgen Tour of California Stage 4 will be discussed and the route announcement Video will be shown. There is no charge for admission.

A local Sonora Amgen Tour website was launched by Level One Web Design to showcase news and volunteer opportunities. You can find it by clicking www.atocsonora.com.

The Amgen Tour falls during the week between the Mother Lode Round-up in Sonora and the Calaveras Fair and Jumping Frog Jubilee in Angels Camp.