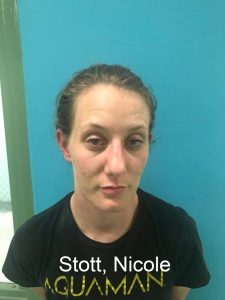 Shortly after midnight this week the PD received a call from someone concerned about seeing a woman going from car to car, with a gas can in hand, and looking under vehicles. It happened in a parking lot at the corner of Snell and Wyckoff streets. An officer responded and found the woman, 30-year-old Nicole Scott of Arnold, underneath a van with a flashlight and knife. Next to her, she had the gas can and a plastic tube. Two men were with the woman, one with a concealed fixed blade knife on his belt buckle, and the other in possession of heroin.

The PD reports that thanks to the quick tip from the citizen, no vehicles were damaged and no gas was stolen.