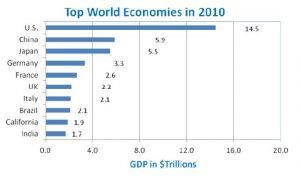 If California was an individual country, it would have the world’s ninth largest economy.

The ranking is based on the Gross Domestic Product. The state’s rank has fallen in recent years. As late as 2002, California was number six. The information is laid out in a new report released by the non-profit Center For Continuing Study of the California Economy, and is for the year 2010.

The United States finished on top with $14.5 trillion, China was second at $5.9 trillion and Japan was third at $5.5 trillion. Notable changes from 2009 were that China moved past Japan and Brazil surpassed California.

The only other individual states with a GDP over a trillion dollars were Texas ($1.2 trillion) and New York ($1.1 trillion).