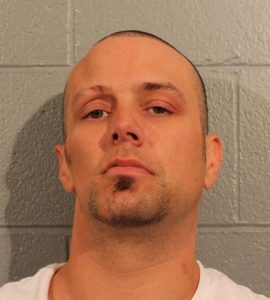 West Point, CA — Calaveras County Sheriff’s Officials are now looking for a Person of Interest in the murder of a West Point man and for unknown injuries to a woman.

The wanted person of interest is Gary F. McMahan, 31 years of age, is wanted for questioning in the homicide of a 45 year old man that occurred on July 9 at a house in the 200 block of Stanley Road in West Point. Sheriff Officials described him as 6 foot 3 inches tall, 220 pounds, brown hair, and blue eyes, with a medium complexion. His head may be shaved, but he may alter his hair with a wig or by some other means. He is also known to have a goatee, but he may be clean shaven.

Gary McMahan has two confirmed out-of-county felony warrants for his arrest. He is considered armed and dangerous.

A 37 year old woman is currently in the hospital and the details of the crime are not being released at this time. The 45 year old man was pronounced dead at a home. Calaveras Sheriff’s Spokesperson Sgt. Chris Hewitt will not say what weapon was used in the murder.
The Sheriff s Office asks that if anyone has seen McMahan do not confront him, call the Calaveras County Sheriffs Office at (209) 754-6500 or the tip line at (209) 754-6030.