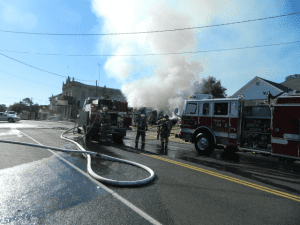 There is no estimate of the amount of damage. The mobile home at 30024 Yosemite Avenue near the La Grange Saloon and Grill was owned by Rick Smiley. Smiley’s wife reportedly died last week of a heart attack. Smiley was at the scene of the fire but not injured. The incident is under investigation, no further details were available.

Special thanks to Lt. Robert Anzar of the Tuolumne County Fire Department for the photos.