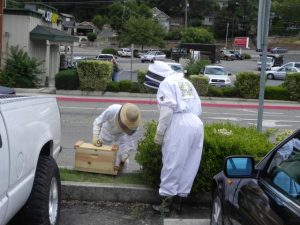 Sonora, CA — Some honey bees do a job on a Sonora business. It looked like a scene out of a Hollywood movie on South Washington Street around 12:30 this afternoon. There were two people dressed in all white jumpsuits with screened hoods over their heads. It wasn’t a movie or hazmat spill….it was bees. There was a whole swarm in a bush in the Wright’s Tire parking lot.


Sierra Foothills Bee Keeper Association Member Linda Reavly says, “We got called out to take care of some bees. So we captured the queen bee and she attracted all the worker bees into a box so we can take them to a Tuolumne City bee keepers hive.”

Reavly says this is their busy season and they have been called by several businesses in the area to deal with bees. In fact, this is the second time in a month members of the group have come out to the tire shop to collect bees.

Owner of Wright’s Tire, Jon Wright says, “About a month ago we just happened to notice the bees making a colony up in the attic part of the building. The hive grew quite a bit and there was a lot of honey when they opened it up and took the hive out.”

However, Reavly says unfortunately we are seeing a shortage of bees. “The bee population in the whole world has gone down. We don’t know if it’s entirely because of pesticides, but there may be bee diseases that we have yet to identify. This is bad because without the bees to pollinate the plants which produce the food we eat we could be in big trouble,” says Reavly.

Reavly says that is why it is important for anyone who finds a hive or swarm to contacts the association so they can come and collect the bees and take them to a bee keepers hive in the area. To do that you can call 209-782-7333 or 532-0615. Also, the association is made up of volunteers so there is no cost to call. Click here for more information on the association.