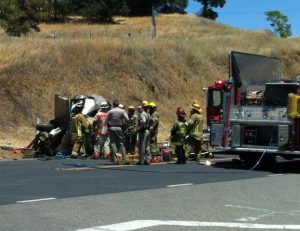 Jamestown, CA — The official report with the initial details about the two car crash on Highway 108 and Bell Mooney Road has been released. The accident happened just before noon near Jamestown and backed up traffic for miles this afternoon. The CHP reports the name of the 46 year-old woman from Jamestown is not being released due to the severity of her injuries. She was driving a 2004 Chrysler Sebring that good Samaritans helped lift up to unpin her from the wreckage.

The woman crossed over the yellow center line and side swiped a Tuolumne County dump truck then hit another vehicle head on. CHP Sgt. Jim Jacobs says it is not known if her driving was impaired due to drugs and alcohol or a medical emergency. He also said that witnesses say she was traveling at a high rate of speed.

Sgt. Jacobs noted that good Samaritans helped pick up the car that was pinning the injured woman down. Jacobs says she had a badly damage left arm. The woman was flown to Doctors medical Center with major injuries.

Highway 108 was completely shut down for more than an hour. At one point traffic was backed up to South Washington Street on 108 in Sonora.

46 year-old Marvin Ennis of Jamestown was in the second vehicle, a truck, he was taken to Sonora Regional Medical center with minor injuries. Sgt. Jacobs says he was complaining of abdominal pain.