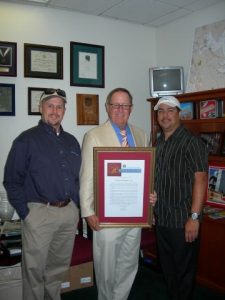 Sacramento, CA – Small businesses are honored from each district of the state as the “Business of the Year”. 77 companies earned the title for their positive impact on California’s economy. At the Capitol, California’s 5th Assembly District’s represented by Assembly Member Frank Bigelow handed out the award to Gateway Press of Murphys. It is a commercial screen printing company that opened its doors in 1981 and has ten employees. It is owned by Walt and Jeanann Markus.
Bigelow recognized the company’s commitment to the Mother Lode and vowed, “With California’s cumbersome regulatory environment, small businesses throughout the foothills continue to be as resilient as anywhere in the state. I’m focused on providing much needed regulatory relief to small businesses throughout my district.”

Another Central Valley business honored was Media Solutions, Inc. out of Fresno. 14th District Senator Tom Berryhill presented the owners, Morgan Kirk and Vincent Melella, with their award. The company specializes in sound, lighting, and video for events.

Berryhill’s Office says businesses with 1-99 employees make up nearly 98 percent of all businesses in California and employ more than 37 percent of all workers in the state. They say small and medium sized businesses also play a critical role in boosting international competitiveness.