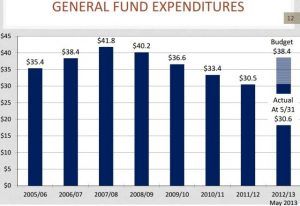 San Andreas, CA – Calaveras County Board of Supervisors are continuing budget talks today. The county expects to have $2 million less in its 2014 fiscal year than in the 2013 fiscal year. The county’s General Fund revenues are estimated to be $36.9 million. In the past 5 years Calaveras property taxes decreased by $5 million.

At conclusion of the Public Hearing, the board will vote on the Recommended Budget, the current proposal totals $108,380,570 for all funds including State and Federal money for specific projects.

County Administrative Officer Lori Norton released a memo stating “For Fiscal Year 2013/14 departments proposed 26 new positions, 4 reclassifications, and the addition of 10 temporary extra‐hire employees. As part of achieving the 5% budget reduction, departments have proposed reductions in time, use of the Voluntary Time Off Program, reduced work week, elimination of extra‐hire positions, not filling vacancies, under filling positions and staff layoffs.”

Law enforcement is one of the departments that are requesting additional deputies and administration staff in the next fiscal year. Delays in hiring people for open positions reportedly saved the county $690,000.

As seen in the photos of the proposed budget slides, the County revenues from property taxes, which rely on property value, are projected to hold steady after five years of decline. Even if housing values rebound modestly, county expenses are projected to continue to outstrip revenues.

The board is considering ways to increase revenue including targeted fee increases. The full budget proposal is on http://adm.calaverasgov.us/