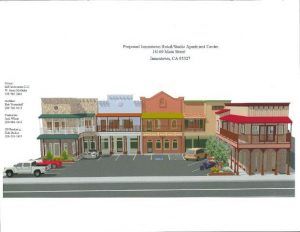 Jamestown, CA — A nearly one million dollar retail space and apartment complex is being proposed for the Jamestown area. It would be located on 18169 Main Street. Currently two buildings that used to house a tire shop and the old Coffee Restaurant are on the lot. Tuolumne County Senior Planner Adam Paszkowski says those buildings would have to be demolished. A family from San Jose with ties to the area is proposing this project.

Paszkowski says, “The applicants are IAE Investments and they are proposing the general plan amendment and the zone change from commercial use to mixed use on the site. In addition they are asking for a conditional use permit and design review permit to construct a two story mixed use permit building. It will consist of about 3,600 foot of retail space on the first floor and the second floor would have five studio apartments.”

One of the buildings will be divided into four units with different facades on each one. It will house four of the apartments. The other building will have one retail space and one apartment on the second floor.

The Historic Preservation Review Commission will take up the subject of demolishing the existing buildings and the design of the new complex at its Tuesday, June 11th meeting. They will give a recommendation to the Jamestown Area Planning Commission. The Commission will take up the issue at its Wednesday, June 12 meeting and make a recommendation to the Tuolumne County Board of Supervisors on the zone change. The Board of Supervisors will have the final say on the zone change at its Tuesday, July 2nd meeting.