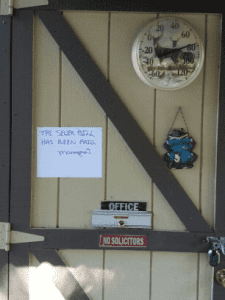 Columbia, CA — A posted notice states the hefty overdue sewer bill for the Columbia Mobile Home Park is paid. Tuesday, April 21st, the owner of the Park, Jim Clayton, was slapped with a two week turn off notice for a $17,884.35 bill. A posting was put up at the park on 22217 Parrotts Ferry Road by Tuolumne County Utilities District (T.U.D.) stating the shut off deadline was June 5th.


At that time, we contacted the owner, Jim Clayton about the situation. Clayton told us, “It will all be taken care of before the due date”. Now, it appears it has been paid. This past Thursday, a hand written note was put up for residents stating only “The bill has been paid” and it was signed “Management”. We tried to contact Clayton to see if the payment was made in full. He did not return our phone calls.

There are 63 spaces in the park, some are for RVs, and others are for houses and apartments. The management says approximately 13 spaces are vacant at this time.