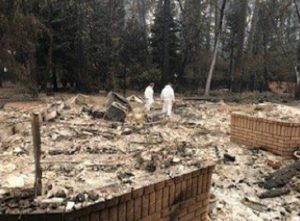 Sacramento, CA – California officials are struggling to find ways for homeowners in fire-prone areas to afford insurance and for utilities to survive liability from devastating wildfires – a situation threatening to worsen with climate change.

California’s recent past “is fraught with wildfires,” shares Chief Deputy Insurance Commissioner Joel Laucher. He adds, “This is the world that insurers are looking at.”

One option is to create a new state catastrophe fund in the range of $15 billion to $30 billion. Moody’s suggested in a report issued yesterday it was the most likely outcome. While the service noted a fund could help stabilize utilities, it warned that the extent of the help depends on its size and how it addresses wildfire costs. Moody’s noted that a larger fund could protect against more fires but could push higher costs onto customers.

Massive wildfire expenses in 2017 and 2018 were the major motivation for Pacific Gas & Electric Corp. (PG&E) to file for bankruptcy protection. It also led to the formation of a five-member board that is considering who should pay for increasingly destructive wildfires.  Board members have until July 1 to make their recommendations.

Risk managers warn that California’s wildfire threat is so great now that even risk pools or catastrophe bonds aren’t attractive to investors. “It’s not like there’s one silver bullet here that’s going to solve the problem,” shared Carolyn Kousky, executive director of the Wharton Risk Management and Decision Processes Center at the University of Pennsylvania.

As reported here, last month CAL Fire weighed in with its recommendations to help prevent devastating wildfires with the summer season approaching. Governor Gavin Newsom plans to outline his proposal to address the problem by mid-April.