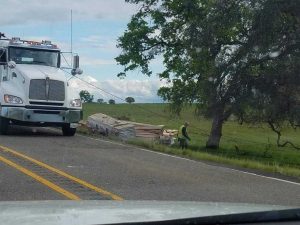 Update at 6 p.m.: The CHP reports an overturned semi and trailer full of lumber on J-59 near Red Hill Road that was blocking one lane for over two hours has been removed and traffic is moving freely once again. Further information on the crash are below.

A special thank you to our community partner Sara Hohman for sending in the photos and video.

Update at 5 p.m.: Environmental health officials have been called to the scene of a big rig crash on J-59 near Red Hills Road in the Keystone area. The crew is there to clean up a hydraulic fuel leak after the trailer of the semi overturned. Officers have been directing one-way traffic for over two hours as the trailer  and its load of lumber is blocking the southbound lane. The CHP reports a tow crew is working upright the trailer while the lumber is being piled on the shoulder and the hope is to have the roadway reopened completely within the hour. Further details regarding the collision can be viewed below.

Update at 3:30 p.m.: The CHP reports that a tow crew is on the scene of a semi rollover crash on J59 working to remove the trailer and its load of lumber that spilled that is blocking the southbound lane. The wreck is about three miles south of Red Hills Road in the Keystone area of Tuolumne County. The CHP is also reporting no injuries in the collision. Crews are also working to cleanup a fuel spill, believed to be hydraulic fluid. Further details on the collision are below.

Update at 2:45 p.m.: The CHP is reporting some type of fluid, possibly hydraulic liquid, that is leaking from the semi onto J-59 after the truck went off the roadway and overturned. The trailer remains blocking the southbound lane, according to the CHP. It is unclear what the big rig was hauling.  Officers continue to direct one-way traffic. Further details on the collision are below.

Original post 2:15 p.m.: Keystone, CA — Emergency crews are on the scene of big rig rollover and trailer crash on J-59 in the Keystone area of Tuolumne County.

The CHP reports that the truck went off the roadway and overturned with part of the trailer blocking the southbound lane. Officers are directing one-way traffic in the area, which is about three miles south of Red Hills Road.

There is no word on injuries, but an ambulance has been called to the scene. We will update this story as soon as more information comes into the newsroom.