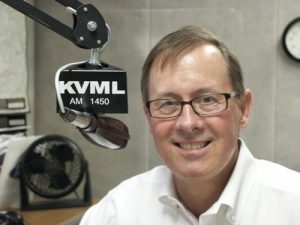 Berryhill was Friday’s KVML “Newsmaker of the Day”.

“Rural communities are under assault on so many levels. Citizens in my district pay their taxes just like their urban counterparts yet are constantly under-served when it comes to the distribution of those dollars. Providing a mechanism for safer roads and some parity in education dollars seems like the minimum Congress could do for the communities that provide so many of the natural resources urban areas rely on,” said Senator Berryhill.

“Failure by the Congress to reauthorize this program will strike a blow to many counties and school districts in the Foothills. We need to remind our federal representatives of the importance of this program.”

According to the two men, the Secure Rural Schools Act fulfills an important commitment made by the federal government to rural counties.

“We must ensure that the federal government continues its commitment to rural California schools. Our young people’s education is vital to their future success and providing quality roads and safe transportation infrastructure in California’s forested counties will see to it that students in my district are successful in their educational endeavors,” said Bigelow in a statement.

The Secure Rural Schools Act, first enacted by Congress in 2000, allows forest counties throughout the country to receive payments based on pre-2000 levels of timber harvesting activity on federal lands.

In California, these federal payments are made to the state and then forwarded primarily to schools and counties. Counties use these funds for their road program. Since 2006, the Act has been reauthorized several times including last June when Congress granted a one-year extension. Unless re-authorized sometime this year, the program will expire and payments to forest counties will cease.

With the assistance of the Rural County Representatives of California, Senator Berryhill and Assemblyman Bigelow joined Assemblyman Brian Dahle (R-Lassen) to introduce Assembly Joint Resolution 9, which urges the U.S. House of Representatives and the U.S. Senate to continue this federal program. The Secure Rural Schools Act is administered by the U.S. Forest Service and provides nearly $35.7 million to counties and school districts throughout California’s forested counties.

In counties such as Alpine, El Dorado, Madera, Mono, and Tuolumne, the Secure Rural Schools payments are a significant source of funding to their public works department. Other Foothill counties such as Amador, Calaveras, and Mariposa receive funding; however, the amounts are not as large based on the historic timber harvesting from U.S. Forest Service lands in those counties.