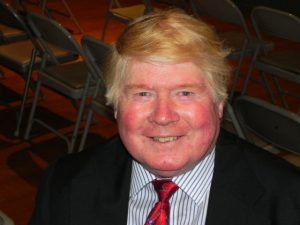 The Tuolumne County Supervisors voted to move forward with plans to disband many of the planning commissions and design review committees.


Jim O’Neil, Commissioner with the Jamestown Planning Commission, was Wednesday’s KVML “Newsmaker of the Day”.

Gray was very vocal in his opposition, calling it a “disservice to the south county.” Gray argued that projects in the Groveland and Big Oak Flat area should be heard by a localized board because they are somewhat disconnected geographically.

After being associated with the Jamestown Planning Commission for over a decade, he thinks that the town’s voices, needs and visions will no longer be heard.

“I’m very dissapointed. There is such a great proven service that these commissions provide. The communication with the people of our community will be lost. Government is at it’s best when it is localized. The County level is simply to large for every diverse community in our region.”

O’Neil is also President of the Jamestown Promotions Club but says that very little of what the Planning Commission has been doing could be transferred over to the Club.

“These are very seperate operations,” said O’Neil. “I’m proud of what our Planning Commission has been able to accomplish over the past years, including new facades for several buildings along with much needed sidewalk and street improvements.”

Those Supervisors in favor of disbanding the local Panning Commissions argued that this will increase the speed of the review process for projects because there will be just one overall Tuolumne County Planning Commission.

Also, by a separate vote of 5-0, the Supervisors voted to disband the design review or advisory committees for Phoenix Lake, Tuolumne, Twain Harte and Muller Subdivision.

County staff will now draft ordinances and resolutions, with an effective date of July 1st, 2013. The Board will continue the conversation this afternoon regarding other aspects of the planning and design review process.