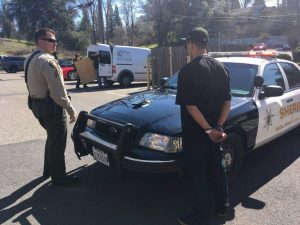 The Tuolumne County Sheriff’s Office reports that 23-year-old Majer Montoya was pulled over for failing to stop at a stop sign and driving his truck through the intersection of Donovan and Main streets. The deputy discovered that Montoya had an outstanding warrant, so he was placed under arrest. A search of his truck turned up nearly seven grams of methamphetamine and an air compressor that had been reported stolen just hours earlier. Montoya was booked into Tuolumne County Jail for the warrant, transporting meth with the intent to sell, and possession of stolen property.