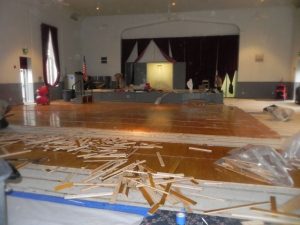 Sonora, CA – The Sonora Opera Hall is closed for the month of February. Our recent freezing temperatures caused a small copper pipe to freeze and burst, flooding the hall.


City Community Development Director Rachelle Kellogg says the water was coming down from the attic like rain and caused some damage. “Currently, they’re getting walls opened up in the kitchen area to let everything dry out. We’ll have to re-sheetrock the kitchen and they’ll be some work that has to be done in the back bathrooms and the hallway. Unfortunately, the water seeped under the wood in the main hall, so that whole floor will have to come up and a new wood floor put down in the hall,” Kellogg said.

Kellogg says the damage is covered under the city’s insurance. All events for the month of February have been moved or re-scheduled.