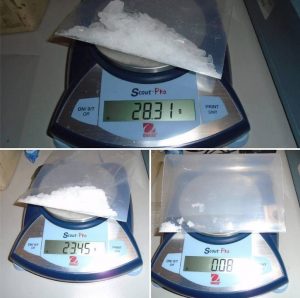 Sonora, CA — The Tuolumne County Sheriff’s Office reports that a drug bust was made after a deputy spotted a vehicle swerving into an opposing traffic lane.

It happened during the early morning hours on Highway 108 near Sonora. The deputy pulled over the green Honda Accord and learned that the vehicle had expired registration. In addition, the driver, 39-year-old Kevin Beard Sr. had an expired driver’s license. Several beer cans were scattered in the car, according to the sheriff’s office, so a search was conducted.

52 grams of methamphetamine were located, and the lone passenger, 26-year-old Erica Synonrath, was also hiding two additional baggies of meth in her clothing. The two suspects, both from Stockton, were arrested for possessing and transporting a controlled substance with the intent to sell. Beard also faces additional charges of driving without a license and having expired registration.