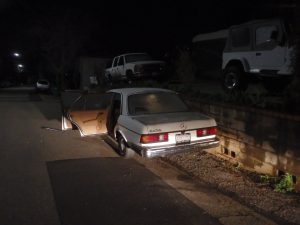 Sonora, CA — A man who allegedly broke into a car with a crowbar and took off for a short joyride was arrested after officers viewing surveillance footage readily ID’d him.

According to Sonora Police, officers arrested 23-year-old Tyler Osborne around 8 o’clock Saturday night for vehicle theft and felony vandalism relating to an earlier incident reported by the owner of a 1982 Mercedes sedan, who over the weekend found the car damaged and moved from its original location on Lyons Street.

The owner, whose surveillance equipment captured the crimes in progress, shared it with responding officers who recognized Osborne as someone they had contacted around 2 o’clock that morning wandering in Sonora. According to the custody report they located the suspect near Walmart, made the arrest, and transported him to the Tuolumne County Jail.

According to the police report, the use of the crowbar to gain access into the sedan caused about $1,000 worth of damage, which generated the felony vandalism charge against Osborne.