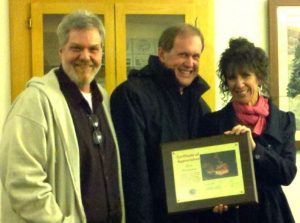 The Sonora City Council meeting on Monday evening began with a few Certificates of Appreciation.

“Ever since the City of Sonora took over the Christmas Parade, we realized that we needed a lot of help to pull it off,” said Kellogg before the Sonora City Council. “We would like to recognize those who have given up each Friday after Thanksgiving, to help make each year’s city parade a successful family event.”

Kellogg recalls approaching Clarke Broadcasting in 1996 and asking for help in announcing the parade.

“They sent their radio personalities out that very first year and they have been set up in various locations along the route, ever since” said Kellogg.

Additionally, Kellogg showed her appreciation for Vics Towing for storing, lifting, hauling and setting up Santa’s Workshop at Courthouse Park each year. Kellogg stated that Selesia begins set-up as early as 4:30am.

And finally Peppermint Creek Carriage Company was recognized for bringing thier beautifully decorated carriage to the city each Christmas and ending the parade by carrying the special guests of the evening, Santa and Mrs. Clause.